Carl is one of those rare individuals who genuinely loves what he does for a living. Not buying it? Look at his work.

He began working on cars with his uncle when he was only eight years old. Forty-two years later, he still arrives at the shop seven mornings out of the week before anyone else is there. Few can compete with his experience and ability to create a quality build and finish. Simply put, he’s passionate about what he does, and it’s reflected in his craftsmanship.

As the heart of the shop, Carl selects only the best, most qualified individuals to be members of his team. He is the epitome of perfectionist, and (literally) won’t rest until his project is exactly how he wants it.

Art can take on many forms. For Carl, the automobile is his canvas, and he strives to be a Da Vinci. 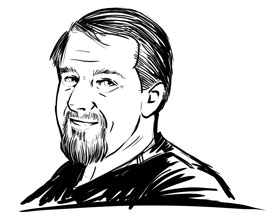